The energy in the air was infectious. Off the main street, tucked away in a small lane in the beautiful city of Colombo, the club (Colombo One) was gearing up for the night’s party. Massive soundsystems and quirky art décor are elements the Bang Bang crew introduce with exquisite flavour to their events. Known for their successful all night underground parties, they’re a crew made up of artists, promoters and musicians. Bang Bang has been responsible for bringing global underground sounds to Sri Lanka for the last few years actively pushing the boundaries.

Andre Periera, artist and one of the founding members of Bang Bang is in charge of the company’s operations. His partner in crime Asvajit Boyle, a well established DJ/producer and the other founding member recounts the inception of Bang Bang. “It’s hard to pin-point a single factor that set things in motion. But essentially, the collective started as a few like-minded friends looking for an alternative to the increasingly over-saturated electronic music scene at the time. Andre and I discovered electronic music at roughly the same time, around 2006, and had a similar desire to try and create an alternate scene. Most of the mainstream night-clubs were still playing the club hip-hop and RnB chart toppers of the early to mid 2000s and on the newly emerging underground scene there was a lot of tribal tech-house being played by the first wave of local DJs. ” 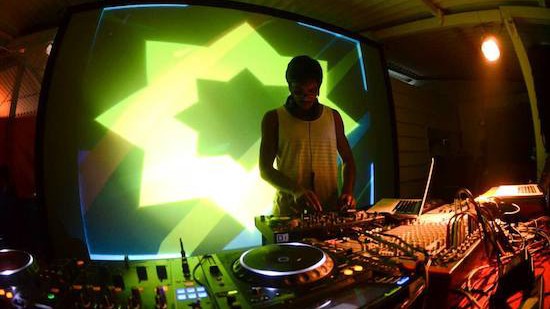 Andre’s musical tastes are wildly varied and he tries to bring those sensibilities into the Bang Bang events. “We used to play progressive techno going for the harder sound. Over the years it evolved and went on to global sounds. We listened to a lot of techno, funky tech and deep house. It will change again in the future. Techno is the main market; everyone is listening to it. Psytrance has just begun to creep into Sri Lanka over the last year. I used to love it but now I like more defined groovy beats.” Asvajit feels that the shift is slow but significant. “The scene has definitely grown exponentially over the last half decade or so since I started my career. But pin-pointing an over-arching shift in musical trends is tough. The music being played on the underground circuit has definitely diversified, and many of the younger generation have moved away from the tribal and slightly cheesy tech-house aesthetic to a more techno orientated sound, though many styles ranging from tech-house, deep house and other sub-genres of electronic music are still prevalent,” he explains.

Asvajit – who spends a big chunk of the year in Germany making music and performing – definitely brings an edgy international flavour to the Bang Bang parties. He also runs his own record label – Jambutek Recordings. “I’ve always had the goal of starting a record label to promote and create exposure for local producers, and once I saw there was enough potential in the local scene I started Jambutek Recordings,” he adds that when he released his first EP there weren’t any other serious producers, but things have changed since then. “Now I’m signing new artists to the label almost every week. The way things have progressed and the talent of the new generation constantly impresses me. 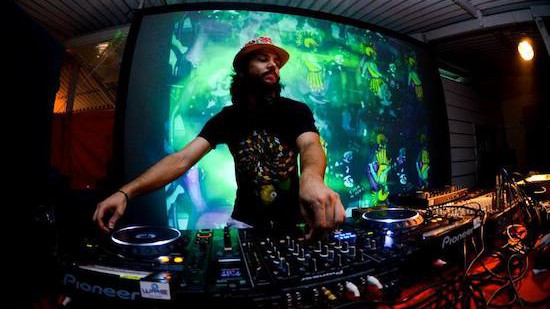 Bang Bang’s aim of creating events that blend vibrant art with sound has given it a unique identity. “Sound systems, the décor and everything else is very well thought out. The place is like a fairytale to everyone who comes in. We make sure we have the best sound and all the vibrancy of an international festival. Our favourite DJs go to badass festivals. Why can’t we have that here?” he smiles.

Bang Bang started off as an intimate gathering of people with a similar outlook and musical taste. Today the motivation remains the same, just on a bigger scale. “We kept it low key and maintained a small circle because we wanted it to be intimate. Most importantly, we wanted to hear our friends play music and have a shared experience listening to it. We made no profit in the beginning. We wanted something cool and that required a lot of effort from our end. We sometimes still don’t profit from our dance events,” he says.

Asvajit tells us about his favourite event so far, describing it as the wildest party ever. “That was my first OMG (Oh.My.Goat). We started it three years ago, first as an annual event and then twice a year. The first edition hosted Sunara’s debut performance as a DJ. We went wild with this party and had Sri Lanka’s first 3D mapping experience on a beach. 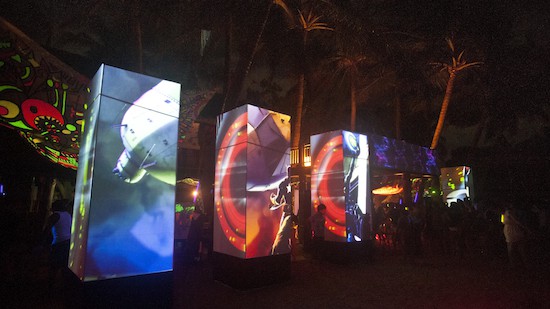 Although the Bang Bang events don’t face curfews from the police, the closing time in general is 1am. “All successful parties however go over night,” he laughs, adding that the one thing he would love to have more of is attention to detail when it comes to sound. “I am an audio enthusiast. It’s easy on the ear if it’s a good sound system.”

The visual representation goes hand-in-hand with the sound. Natalie Soysa – a photographer, curator and artist with Bang Bang – puts her signature spin on their events, giving people what she calls “an out-of-the-gallery, Sri Lankan context”. “I have spent years discovering, working with and chronicling the work of visual artists, thespians and musicians. It’s made me want to see a bigger sense of integration between creative disciplines. I like putting groups of mismatched artists together, starting off the ideation process and watching the resultant chaos.

“The work has never ceased to be brilliant and I am honoured to be doing it with a collective of űber-cool creative souls like Bang Bang. I’ve been watching and chronicling Bang Bang since its inception and launch event Oh.My.Goat in 2011. The first time we officially worked together was in 2013, putting together an installation at the British Council. We went on to work together again on the Southbank Centre installation and realised it was a good fit. I resigned from my post as Head of Arts at the British Council around the end of last year and was invited to come on board as the collective’s curator in the beginning of 2015. I can promise that it’s going to be a brave new year for the aesthetically inclined in Sri Lanka!”

Her equally talented partner in crime, Ruwangi Amarasinghe, injects colour into the crew’s defined but free-flowing art-décor events. “Bang Bang is just a bunch of good friends who appreciate art and music and decided to share it with the world in whatever way we could. We are people who deeply care and are passionate about what we do and strive to do good work,” says Ruwangi. 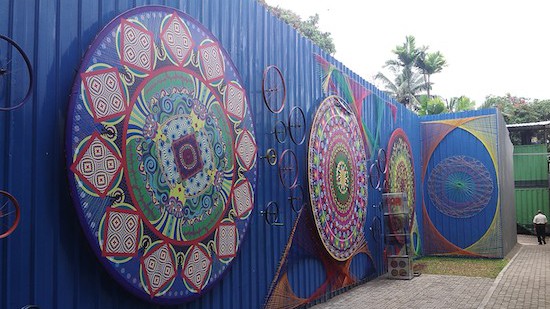 Natalie’s work involves the use of various mediums. She initiated a process that brings together corporates and creatives to produce interactive art in public spaces. “While post-conflict Sri Lanka is in the throngs of a construction drive, I believe that an effective development process demands that infrastructure and aesthetic work hand in hand. I worked on a project that began with a large mechanical installation inside the British Council Colombo premises in November 2013, for CHOGM (Commonwealth Heads of Government Meeting), which was co-created by Bang Bang and Bludge. This led to another installation at the Southbank Centre for their annual Alchemy Festival in May 2014, created by Bang Bang,” explains Natalie who realised the potential for more such installations in addressing the nation’s social needs, would be a great way to create the atmosphere.

Their work has gone from strength to strength with each new project. “We worked on Social Canvas in mid 2014 through the British Council. This project worked with 50 artists and curators, creating public art using multiple disciplines of creativity and technology. At present 6 other installations are in the process of production, funded by corporate entities that have bravely opted to use interactive art to tell their CSR stories and introduce their brand personalities,” she added.

The sounds and visuals blossomed side by side as Bang Bang steadily grew. “I think there’s an element of kindred ideation amongst us. While my primary medium of expression is photography, the ideas behind my work come from a similar mind-space. Bang Bang’s first event OMG! blew my mind – Bang Bang was on a mission to be refreshingly original. I had myself just started to use my camera to create art as opposed to the social documentary and journalistic work I was doing at the time. It was my first point of realization that there were many more like-minded souls who desperately needed to be recognised for their talent instead of being forced back into the system as a doctor or lawyer or business executive,” sums up Ruwangi “I feel that Sri Lanka is growing in its open-mindedness towards more mediums of expression. Especially in these past few years, with the growth of the electronic music scene. What was once a very culture centered conservative country is now branching out and allowing younger, more energetic people to express themselves using bolder forms of art and music.”