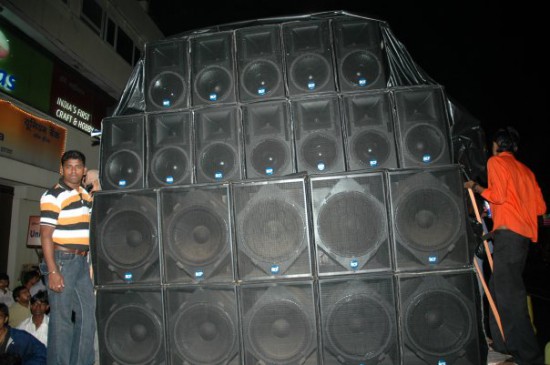 There’s a theme to begin with here, and we’ll string it along the letter C.

C is for Carnival and for Celebration, a fun time that is being had by all – in Mumbai, and in Maharashtra, and over mental mini-pilgrimages countrywide for years. C is for Cliché, one that traces over generations of Bollywood ritualism and riot aftermaths and minority census studies – this is also the C of Communal unity. And C is for the Chaturthi of our elephant god, which ends in the Ganesh Visarjan (the highly amped procession leading to the immersion of the Ganesh idol in a water body) which is the one we’ve been getting at.

First though, some context. Originally designed and popularized by Lokmanya Tilak to tide over the casteism and religious tension clogging the arteries of our pre-Independence freedom movement, the Ganesh festival has grown over the decades into so much more. Namely a gigantic motherfucking party.

C is for Catrina Caif (which it isn’t really, but not many related fucks were given over the course of the writing of this piece), who has the singular distinction of being featured in most of the songs played (as any self-respecting Maharashtrian would know) at each one of these mandal-brewed carnival slash pilgrimage slash Visarjans. All but one.

Year after year, crowds throng the streets throughout the ten days of the festival. Every mandal (the scores of community based organizations that run the celebrations) competes on every level, especially with regards to how many decibels the speakers and the revelers can produce, and how inebriated they are. The music ranges from Daler Mehendi to Aqua to Nashik dhol to… well, trance. 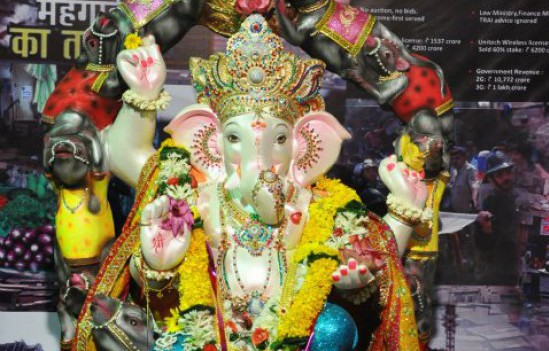 For thirteen years now, the dissemination of dance has delved raucously in the bylanes of Mumbai, and the man behind the phenomenon is DJ Asad ‘Freeaatmah’ Zaidi. Spinning tracks these past twenty-five years, Freeaatmah has also branched into producing his own music since the late nineties – which is around the time he hit upon the idea for Dance Ganesh Visarjan.

“As an Indian, I’ve always been a Ganesh bhakt,” says Freeaatmah, who now curates the event, “but I haven’t been comfortable with the associated sounds – the raunchy music, the desensitization of sanctity. So I approached the good people of the Mahalaxmi Balsangh Mandal in the Mahalaxmi temple neighborhood, one I’ve been familiar with for a long time. I proposed the incorporation of electronic music into the mix, music that incorporates the shlokas and the mantras, but also the energy and the vibe. Music that slips into the best of both worlds. Things just took off in a big way since.”

Things did. From a small stationary set catering to two hundred people in the first year, Dance Ganesh Visarjan has hit the adolescent growth spurt and now attracts a teeming crowd of over ten thousand. With two 40 foot long monstrous music trailers, names like Ashwin Mani Sharma (of Jalebee Cartel) and DJ Whosane! play tirelessly through the length of the parade, money pooling in from conglomerate bigwigs (Reliance was a large sponsor in 2011) and a gigantic public dance venue that stretches over 2.5 km of tarmac, this Ganpati bappa truly has arrived.

“We realized people want the music to travel with them to the actual Visarjan. So we went mobile, setting the speakers and the DJs on large trucks to carry the tempo along. Let’s be honest – who wouldn’t want to dance through the streets of Bombay? What we provide here is the environment and the logistics. 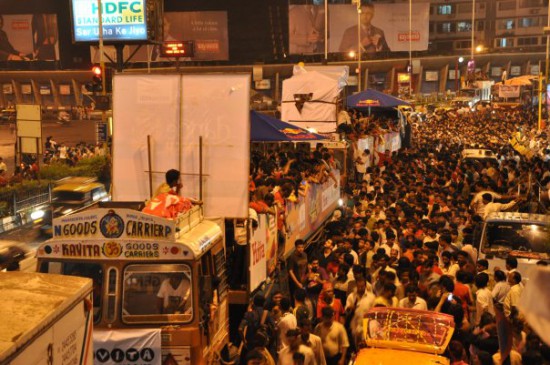 “So far, we’ve shied away from a foreign artist presence on purpose,” Freeaatmah confides. “They don’t understand the sensibilities of our crowds, they don’t know the significance of the Visarjan.”

The best part? It’s free. “Everyone involved, from the artists to the event managers, is extremely supportive. Nobody charges fees to play at the Visarjan. It’s bigger than the profit-making, it’s all 100% community and we work hard to keep it that way.”

Just because these people don’t have the thousands of rupees to access this music in nightclubs, he tells me, doesn’t mean they should be deprived of the experience.

The sheer staggering numbers would quell any cynic. It may be a day for Cliché, but somehow none of them ring hollow. Music has no language, it bars no one, and this is where it all comes together. “People begging at traffic signals, kids selling books at street corners – these are the people who have the most fantastic time. We’d always anticipated that it’d be the youngsters’ enthusiasm carrying us through, but you’d be surprised how many community elders have taken to the concept. Ganeshotsav isn’t about Hinduism, he’s not alien to anyone in India. It’s about being closer to god, and that theme is universal. It’s enough to blur the boundaries of region and caste and creed.”

Even if you aren’t exactly devout, it’s worth making it a point to be in Mumbai for Dance Ganesh Visarjan (TBA, keep an eye on their Facebook) – C is for Crowd. One you want to melt into this year.