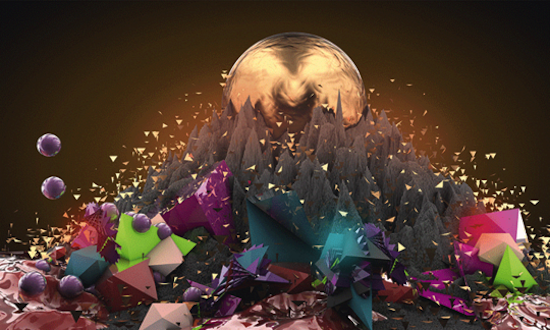 Dedicated to contemporary electronic, digital and experimental music CTM has established itself at the forefront when combining club culture and sound art. Since it’s first edition in 1999 the festival has drawn both clubbers, artists and academics to the the German capital annually.

With panels, screenings, presentations, installations and club nights, CTM aims to present adventurous music and audiovisual arts and place them in the context of and discourse surrounding contemporary artistic, social and technical developments. The extensive and diverse programme takes place in a variety of locations across the city giving the audience a chance to see different corners and aspects of the city. Spaces, galleries, theatres / concert locations, former squats, a former East German broadcasting complex from the 1960 as well as clubs which have become integral to Berlin’s thriving club scene e.g. Berghain.

CTM-13 titled The Golden Age hopes to reflect on the (over)abundance of music in the modern world and the consequences for individuals, aesthetics, politics and economy. The unprecedented access to a plethora of music, communication channels and seemingly unbridled creativity is the what can be seen as the ‘Golden Age’ and CTM aims address this and the possible outcomes or shadow side of a technological revolution which has become part and parcel of our daily lives.

Having said that, it is also possible to ignore all the small print and just go to CTM to hear some of the most cutting edge dance (and non-danceable) music of our times. Highlights include an opening concert by Matmos, an Atom™ live set and his participation on a panel, a sound installation by Ableton founder Robert Henke aka Monolake which creates the auditive equivalent to 3D cinema with 192 computer controlled loudspeakers.

Border Movement highly recommends the German premiere of the beat-driven ‘subversive satire’ of Diamond Version, a collaborative project by Rasta Noton label bosses Alva Noto and Byetone. The violently blissed out slow jams of Dean Blunt (one member of Hype Williams) are also a must as he premieres his live performance of ‘The Narcissist’.

During the week there’s free entrance to Kunstquartier Bethaniendamm in Berlin- Kreuzberg for daily workshops, labs and discussions curated by tech-wunderkind Peter Kirn at the MusicMakers Hacklab which will culminate in an improvised showcase performance with Laurel Halo, Lando Kal (LazerSword), Tim Exile and more as well as DJ sets by Machinedrum and Kode 9 in Berghain Kantine on February 1st. If that’s not enough the submerged slo-mo techno of Andy Stott, bleak sonic excursions of Shed next door in Berghain should suffice. However the latter is also a typical booking for a Berghain/OstGut club night and one to which both die-hard Hardwax fans and tourists alike would flock to.

Perhaps the slightly more musically daring and aesthetically outrageous option would be at Stadtbad (a former swimming pool in Berlin- Wedding which also happens to host the Berlin Boiler Room sessions) on the February 2nd. Putting the mass compatible dubstep Skream (albeit with the gloom of Sgt Pokes on the mic), the shinier electronic club pop of Simian Mobile Disco and the Nico-esque doom dub of Anika all under the same roof as the gHashtag crew is entertaining thought. Why? Mykki Blanco, Half Girl Half Sick, Black Black Gold and more with their industrial ambient southern rap hybrid of bass, trap and and straight up gothic Gucciness will be a cross-dressing tumblr-esque excursion into sound and into the sound of now. There is nothing timeless about it. What’s not entertaining about that after such a heavy week of in-depth thinking ?

In line with the discussion surrounding Berlin’s increased tourism, EasyJet ravers, the internet as a cultural tool, gentrification, social displacement, cultural policy, creativity and artist welfare in the future, there are a number of panels planned.

Particularly interesting is the Death of Rave part 1 and 2. Part 1 reflects on the commercialisation of the UK dance scene over the last two decades and will allow Steve Goodman aka Kode 9 (Hyperdub boss and author / academic) to come to word. The Death of Rave part 2 features amongst others, one of the Berlin club scene’s most proactive movers and thinkers Alexandra Dröner ( one half of the DJ duo Sick Girls, a journalist and someone who played an in integral role behind the scenes in the early years of the infamous Tresor club). She and other speakers shall reflect on over two decades of Berlin club culture since the fall of the wall.

CTM.13 – The Golden Age
Festival for Adventurous Music and Art
28. January – 3. February 2013
Berlin
All info and full programm on › http://www.ctm-festival.de