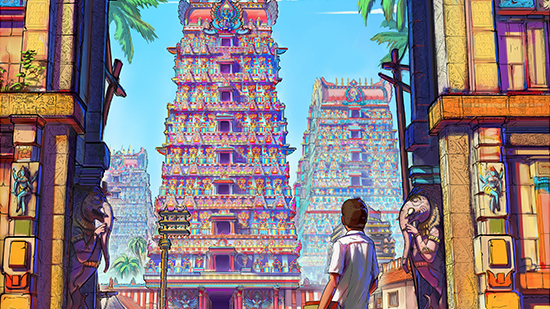 “Art is a way to understand myself and the world around us. I feel I am only at the beginning of a beautiful journey. I have always considered myself as a student of art: a process that is continuous and hopefully lifelong,” says Avinash Kumar (Thiruda), a game designer, researcher, artist and one of the co-founders of Quicksand (an interdisciplinary consultancy).

“My mother Jayalakshmi Eshwar (an internationally acclaimed Bharatanatyam dancer) is a stellar example of the relationship art shares with spirituality. She has danced for more than six decades now. She started as a young child, and gave countless hours to the artform as a dancer, teacher and author. Personally, I don’t feel I have been able to devote myself to a single pursuit like her. This is possibly a result of the mashed-up world I have been a part of, and my influences. However, seeing her is a constant reminder of the possibilities of devotion. And, I would like to achieve nothing more in my life than humility and devotion.”

Growing up, he watched his mother and grandmother work together. One spun tales with emotions, expressions and movement, and the other spun characters into garments, and stories onto canvases. His father, on the other hand, is an aeronautical engineer who worked in the Air Force. “My grandmother was a painter and an amazing seamstress. She made all the costumes for the shows. I grew up in New Delhi but I have always been deeply inspired by South Indian culture.  I have always had an inclination to build entrepreneurial projects in the arts and design space,” says Avinash who is currently working on his game Antariksha Sanchar: Transmissions in Space. “For me, this is a way to pay homage to my cultural roots. With Antariksha Sanchar, we celebrate South India’s plural, multilayered cultural identity. The starting point of the project, as well as my own creative journey, is my mother who also produced a dance opera by the same name in 2012.”

The narrative manifests as a speculative science fiction experience inspired by the dream theorems of the prodigious mathematician Srinivasa Ramanujan, and the opera conceptualised by Jayalakshmi Eshwar. The Antariksha Sanchar show premiered in Mumbai and Delhi last year in collaboration with Red Bull Music. It follows a simple yet remarkable family living in the early 1900s in a temple town inspired by the city of Madurai as they construct a new philosophy blending ancient culture, spirituality, natural creation and science. 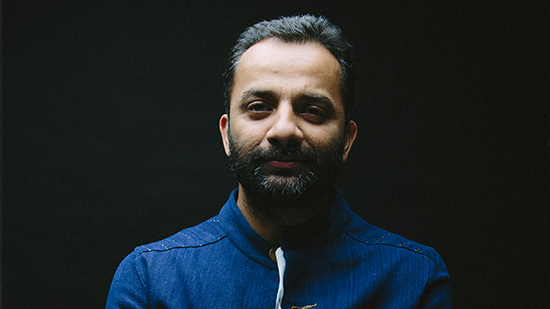 There’s a pursuit of disparate elements that encompass both art and science in Avinash’s explorations; a chaotic melange of entities unravelling dynamics of the world and beyond. A perfect collision, one may argue, and yet brimming with imperfections that define human existence. Where language imposes constraints in perceiving elements of sound and light, Avinash reconstructs multi-dimensional artistic interactions. “The alphabet system is an arbitrary method for creating tangible constructs for intangible experiences”, he shared on Instagram many years ago. “The lack of interoperability between alphabet systems is sufficient proof of the present limits of human development speech in the universe cannot be resolved without this acceptance. The schema of an alphabet is unique to organisms that have evolved a social tool for communication with each other using shared meaning placements and symbols.”

The creative process with game development, he says, involved immersing into the rational world of mathematics and the extremely irrational world of dreams. They began by keeping a small dream diary of Srinivasa Ramanujan, exploring the world of his dreams and crafting a story by understanding how a mind would look at space exploration in the early 1920s. “On one hand, we were talking about the exploration of Mars. On the other hand, we also wanted to build a simple character that one might come across in a small temple town in Tamil Nadu. We visited a lot of museums in Delhi, looked at objects and also used them as references to create our own story-worlds. We also visited traditional South Indian homes, collected assets to create ‘village life’ and build on material libraries which all eventually tied back to the game. In parallel, we also digitised my mother working closely with a 3D modeller and my grand-uncle by translating him into a devout character essentially creating the nucleus of the family which is at the center of the game. In fact, Ramanujan’s mother who fulfils the role of a teacher and a philosophical adviser is inspired by my mother,” he explains.

The journey involved extensive research into the existing gaming market globally as well as in India. However, Avinash soon realised that there were only a handful of developers creating games which were independent and exploring local ideas and themes revolving around family and culture. One of the characters in the game is an Avvaiyar (respectable woman): an honourable title bestowed upon some of the most important women in Tamil literature. “My thoughts go towards my lovely grandmother or ‘Amama’ who brought my mom and me to the arts. So, we owe everything to her”, shared Avinash on Instagram years ago: “She also imbibed in us simple and sound values that I am still struggling to fulfil. For me, she is the Avvaiyar we learnt from”.

“Our intent is to focus on storytelling. When we first started, we were confronted with the challenge of establishing and developing our characters for which we drew inspiration from people we knew rather than creating fantasy video game characters,” he said and added that a lot of his experience as a visual artist helped him contextualise the story and the nature of Ramanujan’s dreams, “The key idea embedded in the project is synesthesia: how music and visuals can be combined into the complex world of video game design.” 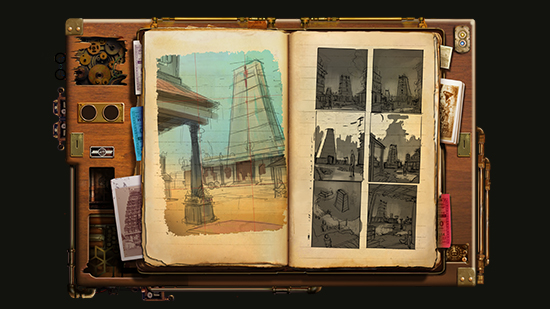 According to Avinash, the process, over the years, has helped him evolve as an artist. For, it specifically brought together two aspects: one working with his mother, and studying different forms of expressions, and the other exploring a free flowing fantasy tale about science fiction, space exploration and the universe. “For me, the experience of working on the project has enabled the exploration of transmedia storytelling,” says Avinash, “It goes back to understanding that you need to be fluid between what you like and create, and vice-versa.”

With Antariksha Sanchar, Jayalakshmi Eshwar’s performance explored instances of flight and aircrafts in Indian mythology, posing philosophical and practical questions on man’s ability to explore the universe. “These were also some of the original themes of the video game project. We brought Antariksha Sanchar back to stage late last year in the form of a fantasy Bharatanatyam dance opera where multiple worlds collide,” explained Avinash, “The opera is scored by a collective of Carnatic and electronic artists accompanied by visual performers and video game artists who are redefining the landscape of modern Indian digital expression.” The Antariksha Sanchar Ensemble helmed by Murthovic – a Hyderabad-based producer – consists of Shridevi Keshavan (an independent electronic and Carnatic musician) as the lead vocalist, Raghuram Hari on mridangam, Abhijit Gurjale on violin, Vijay (yanni) on bass/keys and Hitesh on drums. “Murthovic and I were already working on sound design for the game. We spent over a year developing the dance opera with the team spread across the country. For us, it has been about integrating three distinct art forms: electro-Carnatic music, visual art and classical dance,” said Avinash. 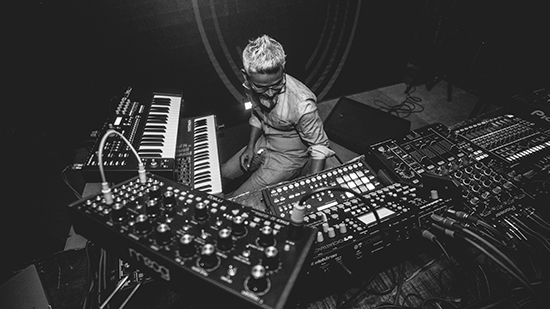 Where art collides with sound…

“To play with an age old palette of Carnatic music, bring in electronics and merge the two worlds for a new aural/sonic realm of expression and storytelling via emotions, moods and motifs as an electronic musician is a result of the time I spent working on Antariksha Sanchar,” says Murthovic, “The score for the theatrical performance/opera was led by the story, and the dance. Surely, it is not a groundbreaking attempt rather an amalgamation of Carnatic and electronic music. The first half of the story is set in the 1900s. Therefore, the tone of the music is rustic, somber, devotional and more inclined towards Carnatic compositions based on meticulously chosen ragas whereas the interludes, and the second half comprised sci-fi and electronic explorations with deliberate colours of melody from the Indian palette to showcase various developments in the story. It was inspiring to work with two dedicated and passionate artistes. Beautiful and innovative things can happen when artists from various backgrounds come together and experiment with their art to tell a story,” he said.

Born and raised in an army family, Murthovic was a research student pursuing his PhD in Toxicology after finishing his Masters in Environmental Sciences. “Music just happened to me (on a professional level), and my PhD programme was never completed which sometimes I regret being an avid science person. But there’s a certain satisfaction that I get with music. We would wake up every day to my mother playing Sri Venkateshwara Suprabhatam by M S Subbalakshmi. I, on the contrary, was more interested in the rock and roll music that I was exposed to in the late 80s growing up in the cantonment areas of the far-east.”

The musician believes that art and artist have condemned the anomalies of sociopolitical systems for centuries. And, it is still prevalent. “I think art has been a voice in surrogate and many a times it could be direct, even provocative. Art is the voice of the people. It is one of those things that the society wants to express, celebrate or perhaps even condemn. I feel lucky to be born in an era where there is an amalgamation of so many different forms of art and artists thereby giving rise to a unique and relevant take on the current times we live in. And, in these bizarre times of hate, discrimination and divide, music will always be my best friend. As an artiste I am always trying to learn and explore new things in the realm of my art and its allied fields. Music is spirituality and a way of life for me. Amongst the good and bad that I experienced in my personal life, music has always helped me stay afloat in both spirit and sense.”

Within the cross-sections of art and music, a dialogue brims with tonalities that coherently shape structural elements in the live opera. There’s a certain mystery that emerges in reconciling patterns; a frigidity that bristles amongst colliding notes. Migrating to cohesive melodic figures, the stillness punctuated with haunting tones brings to life a story surrounded by dream, myth and alternate realities. “The fact that the game and the dance work together is a beautiful metaphor for my mother and me working together. Not only has her dedication to art granted her a seemingly eternal grace and beauty, but also a meditative calm and acceptance of the universe and its ways. For me, this show and project feels like I am learning from my master,” says Avinash.

“And, if there is one thing you could take back from our adventures, let it be a renewed belief in the beauty that surrounds us, and the beauty that fills us…” antariksha.sanchar – famous last words.