THE RISE OF ELECTRONIC MUSIC IN CHENNAI

Almost as a theme, Chennai, aptly described as the southern armpit of India, has always hosted eccentric contrasts. Some of the greatest scientific minds and influential political movements in the country emerged from here.

This city accounts for enough of the nation’s GDP as well as its domestic consumption, to regularly pose serious “megapolitan” difficulties to its administrators. But any aspirations you might have of encountering a vibrant nightlife ‘scene’ or artistic community equal to that reputation will be brutally beaten back by some rather strange conservatism.

The state of pub entertainment and leisure here is subject to your garden variety of colonial-era Indian laws about permits and licenses, regularly put to use to ruin your sense of fun, as well as quasi-prohibitionist institutions like the TASMAC – all wholesale and retail vending of alcohol in this state is controlled and monopolized by the State Government – requiring bar owners to ‘buy a lease over a TASMAC’, and in doing so be open to countless forms of bureaucratic tussling and police harassment. 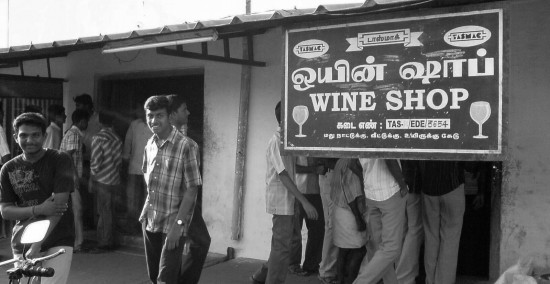 While this may just conform to a larger pattern of social conservatism and lifelessness, wait till you try to buy a case of cold beer here. After ruining your day just to salvage some piss-warm beer fighting through 3-4 “TASMAC shops” in these muggy sun-burnt streets, discovering some of India’s finest indie bands in recent years out here will be the last thing on your mind. But here they are: Adam & the Fish-eyed Poets, The Shakey Rays and a handful of exceptional talents, improbably good musicians and songwriters among them who’ve stood up to be counted. During the last couple of years, confounded critics have lavished high praise upon these acts and in doing so, cried themselves hoarse with excitement.

Though neither large enough nor vibrant enough to be a ‘scene’ all of its own, it’s impossible to miss the common thread of themes and motivations in their brilliant music.   But where a scene doesn’t yet exist, owing to the lack of affordable practice rooms, local press and patronage and most importantly, half-decent, paying venues to play the music in, it may also just never come to exist for the same reasons and more. These bands are frequently caught under-selling themselves, not properly advertising their gigs, and giving up in the face of complete disharmony with what passes for mainstream music here.

But once in a while, on a Friday or Saturday evening at the Unwind Centre (a live music venue that erm, doesn’t pay its bands), if you are looking (and lucky), you may glimpse this revolving door of cool bands kick up a hell of a rock n’ roll racket to their handful of friends who come to cheer them. This is for sure: give these guys a little more money, recording space and time, venues to play in and some glimmer of hope to penetrate their disillusioned overeducated hipster indifference, and you are guaranteed to hear some of the country’s most sincerely-written best-played music.

In the next part of this series, I will illuminate the few successes of this ‘scene’ while also lamenting its many doomed features, characteristically defined by contradictions and intermittent brilliance.