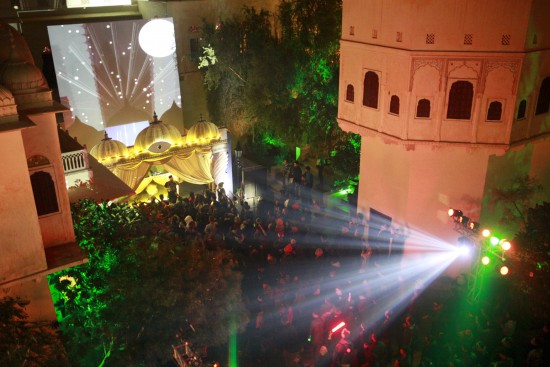 The last month of 2014 was for many (including this author), defined by a singular hazy, ethereal weekend embellished with stars and light – an empty oasis in the desert brought to life by the sound of music and laughter, and imbibed with the energy of a thousand existing as one. The Magnetic Fields experience often seems to inspire superlatives in even the harshest critics, and not without reason.

Of course, like any festival, the spirit of Magnetic Fields doesn’t lie in some abstract plane but is worked upon, painstakingly and meticulously by a collective of people whose skills and talents are utilised for a greater good. Months of effort, planning and dedication go into creating the sanctuary that housed us all for those 3 unreal days.

Border Movement and the Goethe Institut have been essential to the growth of Magnetic Fields as well as one of its founding partners, Wild City. The project has played a vital role in presenting and promoting emerging electronic artists and events in the South Asian region over the last couple of years, particularly through its series of residencies, workshops and events which have taken place so far in Delhi, Chennai, Kolkata, Rajasthan, Colombo, Dhaka, Karachi and Berlin.

Border Movement brought out the big guns for Magnetic Fields, bringing in Cologne based electronic record label Kompakt (more here) and a very special visual team that had taken part in the Colombo 2014 Video Lab.

The Kompakt showcase was set to include Justus Köhncke, Weval and one half of Terranova – Fetisch (who unfortunately injured his back prior to the festival and was sadly unable to attend). The void that was created with Terranova’s absence was filled by talented newcomers Weval, who took charge of the reigns and played an incredibly well received DJ set, in addition to their live act.

The melodic, electronic heavy selection was met with expected enthusiasm by the crowd, considering the duos absolutely brilliant live performance where they debuted their brand new ‘Easier’ EP in India for the very first time. They opened with electro anthem “Gimme Some” – it was easy sailing from then on with many describing the performance as among their top acts at the festival. Weval gave the audience exactly what they wanted and it’s safe to say that they’ll be welcome with open arms next time they come down (by the local barbers as well).

Veteran musician Justus Köhncke flew up to the desert from Chennai after a successful stint mentoring young producers at Sound Lab 2, along with CEE. Wearing a sari draped like a shawl and carnival style makeup, Justus managed to keep the crowd up till the Bhavishyavani dawn party the next day despite a few minor technical difficulties.

Sound forms the nucleus around which any good festival is built, but Magnetic Fields didn’t limit itself to a single sense. Sight and design is something that goes hand in glove with the music. With the creative lead taken by festival partners WeThePPL, THOT and Undercover Agents the festival became a spectacle in itself with tiny, glimmering lights strewn across green courtyards and creamy palace walls, colourful installations around every bend and two beautifully designed stages. In terms of visuals, however, no team deserves a greater pat on the back than the Border Movement Visual Lab, who were given the formidable task of taking an already breath-taking Rajasthani palace and converting it to something even more spectacular. It’s no easy job to make Alsisar Mahal more picturesque than it already is, but somehow, despite being dropped in the middle of nowhere with barely any connectivity, the team, isolated from the usual tools, tapped into the depths of their imagination and serenity of their surroundings producing simple yet stunning content and delivery.

Sourya Sen, Lalindra Amarasekara, Nishant John (better known as ‘Zombie’) acted as resident VJs for the Night Stage (apart from setting up a visual installation near the day stage) and Amandeep Pablay took over logistics and management. We asked Lalindra what their initial reaction to the opportunity to work at the festival was – “The space seemed to have great potential for inspiration and to do some interesting work, so we were all excited. It was also exciting to know that I’ll be working with Nish and Sourya again, after our very successful project in Colombo”

The successful project refers to the Colombo Video Lab and Pettah Interchange , in which all three artists took part, converting the abandoned Rio Cinema into a kaleidoscopic ocular treat under the watchful tutorship of German visual giants Pfadfinderei – “Three of us had already worked with each other and so shared a certain comfort zone coming into Magnetic Fields. The Video Lab in Colombo was an eye opener. I think it’ll influence my work through my life. First of all, we worked over a few days to build all the visuals at Colombo. Second, we worked with a bunch of people who had different skill levels and different styles which led to us learning from each other. And then there was the guidance from Pfadfinderei which instilled a lot of confidence in all of us” adds Sourya.

The result of the year’s hard work was apparent in the unique, largely monochrome visuals at the festival that took inspiration and imagery from designs that were first ideated and created by WeThePPL’s Kunal Lodhia (“his design elements for the festival were especially helpful”, says Zombie). The distinctive combination of sharp geometric motifs and softer organic forms were inspired by the palace’s Rajput design and facade.

Says Lalindra about the aesthetic behind the visuals – “The festival theme revolved around space and time. Using this, we gathered our efforts to create imagery with no boundaries or edges, which seemed to not have a start or ending, but flowed right through, without being too busy on the eyes.” Zombie adds that they “wanted to create the illusion of the night sky so most of the content was inspired by stars, comets, moons, planets”, aptly so as this years theme revolved around the whimsical idea of nomadic space travel. 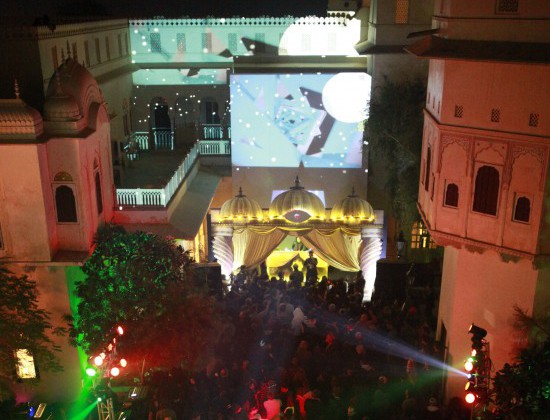 The beautiful interactive visual installation on the busy pathway between the day stage and courtyard was, heavily, Lalindra’s design – “The theme for the interactive installation was that every conscious or unconscious thing we do effects everything around us. We are all a part of space and space is a part of every one of us. An eye representing the universe followed you as you move, depicting that the universe is always with you. When you opened your arms flowers bloomed as stardust rose towards the eye, which depicted our bond with the life and the universe around us.”

Of course, no project is without its fair share of challenges – “There were a few unavoidable hitches. We realised that the facade of the night stage was blocking the main projector projecting on the whole screen. We had to solve it by using a second projector to fill up the space right behind the artist. Being at Alsisar, in the middle of nowhere, isn’t too convenient when searching for the right equipment, but apart from small logistical issues, every thing worked out nicely” says Sourya.

The BM visual team more than managed to pull everything through, despite the difficulties, and also, in the process had a bit of fun – “The festival it was great! The weather, the atmosphere, being away from urbanity and the people around all helped in making it a memorable experience.” Says Sorya, as Lalindra tells us that his experience was “magical”. Of course, Mala’s outstanding, bass heavy closing set didn’t go unnoticed – “I was blown away by the vibe and the amazing music that we were doing the visuals for. Highlights for me would have to be Mala’s set and the secret parties” added Zombie.

It becomes obvious to me as I peruse the interview that it is the team’s shared passion for a common vision that’s going to take them places – and they’re not shy about promising bigger and better projects with each passing year. With more time and opportunity, Lalindra tells us, the entire Border Movement team (including the two members who weren’t present), is excited and enthused about reaching their full potential.

Every performer at Magnetic Fields brought his or her magic to the festival in their own way, but the last night, particularly, was pure magic. Dubstep legend Mala’s set took place on the last night of and experiencing the collective energy shared amongst nearly 1000 people, dancing blindly to sub bass frequencies that we’re surprised didn’t bring the entire palace down, was something that can’t be forgotten in a lifetime. The image of Mala’s dreadlocked head bobbing to the beat as thousands of arrows shot up from his back on to the imposing palace walls, only to burst into a million, tiny, starry-silver pieces everywhere was a pleasure for every single sense in the body.

The visuals, the music and the people make for a journey that we’re sorry only lasted 3 days. Here’s to the Goethe Institut in South Asia, Border Movement, their dedicated commitment to promoting electronic music and contemporary culture to the South Asian masses and to collaborations in the future. Follow the online blog on Facebook and Twitter for updates on upcoming artists, events (particularly the BM Lounges) and new features.