‘Art may be escape but escape gives me hope’ 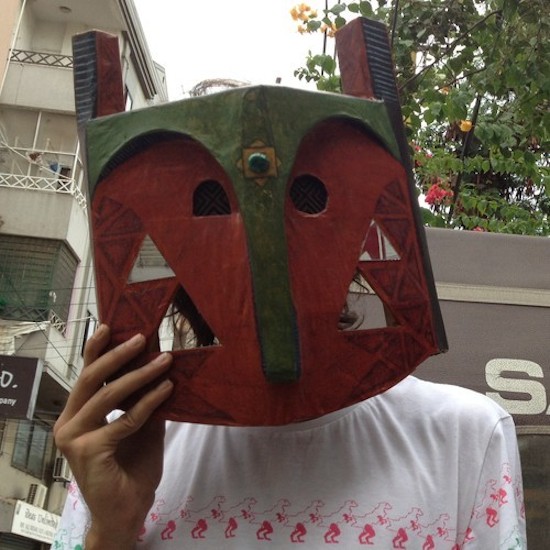 Cloaked in mysterious melodic layers with a structure that delicately crafts aural twirls, Nawksh Toboggan’s musical identity is a cluster of expressive soundscapes. While the orchestral wonderment of his compositions unfold tales of intrigue and enigma, the sepulchral undertones camouflaged within a moody ambiance take one on a profound journey towards the soul of his music.

Twisting and turning every dulcet into an alluring musical knot, the Karachi-based producer’s sound evokes atmospheric warmth through tones that are dripping with murky textures. Maintaining complete anonymity, Nawksh with his characteristic mask has managed to etch out an identity for himself devoid of any conventional familiarity. Perhaps the mask provides him a sense of liberation; perhaps there’s a symbolism involved. We may never know!

“It is what it is. It isn’t about anonymity or at least that wasn’t the intention. When I was starting this project, I realised that the mask was just another opportunity to be more creative with it. The design of the mask evolved along with the character. Slowspin helped me create it actually. I never mentioned my real name because it isn’t important. Besides, no one’s ever asked me about it,” said Nawksh.

While his forte lies in carefully constructing experimental snippets, avant-garde electronica forms the crux of his compositions. Almost an absurd sonic art experiment, his project could be regarded as a harbinger of progression and hope to those in search of eccentricity within the conventional electronic spectrum.

While his creative process may not be applied to any generic pattern, he does believe that the identity of a being does have a certain amount of creative or non-creative influence in any form. On whether or not it is important for an artiste to dissolve his identity and connect with all beings sans any preconceived notions, he said, ”That ‘struggle’ is both an abyss and a gold mine for me. I don’t really know what is important for anyone else but I think it is best to store my data somewhere safe and log in to a new.”

There’s an unfinished story in almost every tune and an air of mystery woven between each musical layer. While jaunty rhythms create a network of pulsating interactions, the melancholic dip and rise of his melodies draw you into his world of unexplored journeys. And yet, there’s something positively soothing about his compositions.

While ‘Alone Thoughts’ captures the restlessness and anxiety of a lonely soul lurking underneath a web of emotions, ‘Counterpart’ is a celebration of upbeat sounds ranging from gritty textures to hypnotising verses. Likewise, Somehows Somedays builds a dreamy layer of warped vocals amidst powerful rhythmic fragments; while MyQuickEscapeRoute+ is a heady mix of futuristic sounds that emerge and dissolve within a space that enhances every pore of an organic melody. The latter being one of Nawksh’s favourite pieces amongst all his compositions. The reason: “I just find it effective.”

According to the artiste, music is nothing but an exploration of sounds which involves us trying to understand, manipulate and eventually use it to communicate anything that language is incapable of expressing. In fact, his first EP titled The Villain’s Grin beautifully encapsulates what he is striving to achieve as an artiste.

“Experiments in sound can lead to exciting results. Even though I indulge in it quite often, I don’t see myself as an ‘experimental’ musician because all the experiments conducted are in little bubbles — in controlled environments — that are captured separately and eventually placed together like a collage. I think the actual ‘music’ lies in making that collage, and that’s no experiment!” said Nawksh who sincerely believes that art in any form can bring about massive change in a ‘socially relevant’ context.

Nevertheless, on a fundamental level art may bring forth a whole new dimension to escapism apart from instilling a sense of hope in mankind. To which he replied “art may be escape, but escape gives me hope”. He also feels that there’s quite a lot going on in Pakistan with respect to nurturing different musical genres and it is only growing. Artistes are now getting the opportunity to share their sounds all over the word. Some have tried and others are still determined to attempt and create makeshift infrastructures to support this wave of new artistes in the country. However, he said that it could all be social media hype and nothing else substantial for the most part.

People are making music and putting it out on the Internet. And, there’s definitely a conversation happening. Good music is coming out of other cities besides Karachi too. Lahore and Islamabad are really brewing some good stuff. There’s all kinds of obscure goodies out there,” said Nawksh who further added that rather than sampling and framing Pakistani sounds as ‘exotic’ it would be wise for musicians to incorporate the folk/desi expression using technology and other media which may ultimately result in the exploration of the positive aspects of their surroundings.

Despite the dramatic portrayal of mystery and awe, his tryst with sounds and vibrations illustrate an attempt at developing a sincere connection with a medium of expression that not only enables him to form a bond with fellow beings but perhaps also helps him understand his own individuality. Although the multitude of variation in his sounds depict elements of curiosity, it is his mastery of weaving a tale with every melodic nuance that truly defines his artistic identity.