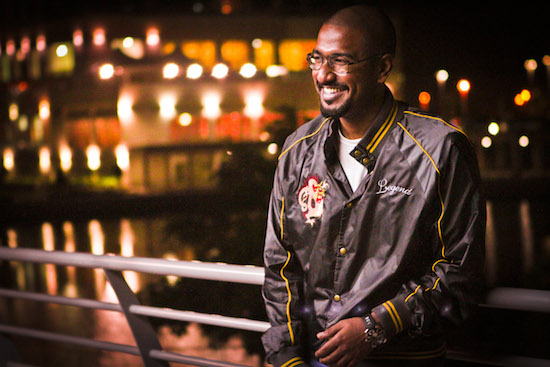 “Life has to hit you hard, and then you have a lot to say” and Irshad Azeez has plenty. Sri Lankan born and raised rapper – Irshad Azeez, or Jibberish as his stage name goes, is now based out of the UAE where he’s pursuing a brighter future for live music in the region.

Talk about how you got into making music.

My Mom’s family has a very musical side. We grew up with drawers full of disco cassettes and things, I was even sent for piano classes when I was little.
When I moved to Dubai, I got into jazzy hip-hop, met a death metal drummer called Ameer Ismail who’d been making some hip-hop beats and gave me his CD.

I was like ‘oh my god, there’s a guy my age and he’s working on hip-hop! That’s cool, why don’t I do it…’ So I sat and I wrote. And I sucked, so I dropped it for a year.
Meanwhile Amir finished his bootcamp service in Sudan, and returned. I caught up with him again and he gave me another CD. I was like, ‘oh shit this guy is still at it. Let me try again.’ And that’s how we got the project together.

So what happened to ‘Diligent Thought’? It was one of Dubai’s most celebrated hip-hop acts ft. MC Jibberish Wriggly Scott aka DJ Solo and Feras Ibrahim until 2011

We did really well as a group – most of Dubai still remembers us for that that Old School rough hip-hop sound. We kind of fell out of it because we were too young, in college and didn’t’ know what the fuck to do with all of it.
We were encouraged to do shows and there was quite some pressure, and eventually everybody decided to call it quits.

Your induction into music came from a collaborative space. What’s your process like now?

Ever since then I’ve just been developing my craft and wherever these guys could give me beats, they would.
But Ameer stopped making music and the other beat maker left for Canada, so I had to get into production myself.

I’ve grown a fair bit now and being Asian, I see hip-hop in Asian percussion. I really want to emphasize that more and want Jibberish to bring out some Asian roots. Because that’s me.
This whole process for me is kind of about identifying who you are.

Would that be the pillar of your musical philosophy?

You start off thinking you wanna imitate or sound like somebody or something you enjoy, and as you mature as a creative person you say fuck that shit and you want to make something that represents you. Then you start tapping into everything from your childhood and you start creating an identity through the music and it’s a beautiful thing.

Coming from a lyrical space, what moves you to write?

I used to like just the simple wordplay. Hip-hop’s got the safe zone of ‘brag raps’- talking about how badass you are. (laughs) And hip-hop MCs have gotten it down to an art which is hilarious. I’ve moved away from that because- you know, you grow out of it.
I haven’t written in a while, but I find, my last mixtape ‘Low Light Conditions’ came from a very aggressive and negative place. Life has to hit you hard, and then you have a lot to say.

Now, I don’t think I should be putting aggression out so much. End of the day, the world has too much aggression, so if anything, musicians need to counter the harm that’s being done to it by all the other forces. It’s like we can celebrate, we can heal, show love and bring happiness, because music can make people dance and other beautiful things, you know, and it’s being used by some marketing team to plug other shit…

That’s what I want to write about… without sounding cheesy.

Thoughts on Sri Lankan music scene? Any ideas to go back and pursue music there?

If I go to SL I’d like to establish myself there and then jump into India for a while before I head over to the far east.
I’m giving Dubai another year. I’m using this time to develop my skill and sort out my equipment. If it’s picking up, I’ll stay. If not, home is home. SL is home for me.